Great, now all it needs is an Android/iOS client to be one of the best cross-platform file transfer apps out there

Absolutely yes. Obviously having clear guides and help is good to narrow those choices down, but if we go beyond the basic example of Linux distros, just check out the phone market. There are hundreds of new choices each year, without counting the ones from previous years. It’s absolutely impossible to get a good deal without tons of research or luck.

Had to deal with that experience personally these last couple of days, after years of not following the smartphone consumerism hype machine.

Developer gets hired and get to work on it without relying only on donations, plus the name recognition of Thunderbird.

False. Just like F35, all it enables is the “Fedora third-party repos”, which include Google Chrome’s and PyCharm’s repos, as well as Steam and NVIDIA Driver filtered RPM Fusion and filtered Flathub.

You still need to use the terminal to enable RPMFusion and there’s nothing the Fedora team can legally do currently to make it available to users in an easier way without putting themselves to some level of risk.

Yes, but that by itself doesn’t end bullying, because bullying isn’t just physical assault. I’ve been through it myself for three years, during a time where bullying was juuuuuuust starting to come to the public discourse, but not taken seriously enough.

Of course there was physical assault involved, but also in a lot of other ways, like mean comments and gossips, being excluded from everything related to your colleagues, humiliation in many ways as well, like mean nicknames and making fun of the things you like or pulling pranks.

And also it usually isn’t an individual thing, it also depends a lot on the other people around the victim “looking the other way”, which happened a lot with me, with the point of other classmates acting as an alibi for the bullies and trying to gaslight me.

There’s not a lot that can be done about those if there isn’t an actual effort from the school.

They just implemented a systemd feature, systemd-oomd. To be honest, it can cause issues in some edge cases, but it works pretty well in any distro (that uses systemd).

TIL pipewire added a working version of module-echo-cancel.

Been waiting for that for such a long time, how long has it been that they added it?

aneeshsharma/DiscordAudioShare-Linux: A utility to share audio on Discord on Linux by routing your desktop audio through your mic.

aneeshsharma/DiscordAudioShare-Linux: A utility to share audio on Discord on Linux by routing your desktop audio through your mic.

I’ll just stop feeding the troll, if anyone else wants to indulge in the internet equivalent of talking to a brick wall, feel free to go on.

Yes it absolutely is, because “woke culture” is nothing but a strawman to justify LGBTQIA±phobia and racism. Let’s not forget that “traditional values” are forged in a lot of those things.

Just for a bit of context, this guy is mainly famous in the Linux community for his “Linux Sucks” series he used to do annually, with a light-hearted but pinpoint approach to tackling the main problems with the Linux desktop in general. That is, until the pandemic hit. Then he just unleashed his inner fascist that was probably always there.

Then his content became mostly complaining about “woke culture” mainly in Mozilla and the GNOME team, “cancel culture” after the whole schtick with RMS and his behaviour and probably his worst take yet to this day, reducing Linus Torvalds himself to a “vaccine passport company employee” when he yelled GTFO to another guy spreading misinformation about vaccines in the Linux kernel mailing list.

tl;dr the guy got famous for good content and then became publicly the complete ass he probably always was

Man, Lunduke can create some good content every once in a while, but fuck that guy.

He can’t even proceed to tell news without disrespecting Danielle’s transition and consistently calls her by her old name.

Why exactly? It seems like they are investing further and further in Linux support, probably for their server customers.

FreeCAD now has a legal non-profit organization based in Belgium

FreeCAD now has a legal non-profit organization based in Belgium

right? it went from fedora being the only distro putting proper effort into using and supporting it to more and more distros using it as the standard

link
fedilink
@joojmachine@lemmy.mltoLinux@lemmy.ml•GNOME is about to remove the top panel's rounded corners for a performance improvement
link
fedilink
2•6M

Oh, it’s firefox-gnome-theme mixed with firefox-vertical-tabs. I usually use the dark mode variant, but switched to the light one for the screenshot for a better contrast.

Dynamic double/triple buffering for Mutter is ready to be merged

external-link
After over a year of development, the main dev behind MR1441 finally marked resolved the main issues with it and marked it as ready for merging. If everything goes right it should be ready in time for GNOME 42 release and for every other DE that uses Mutter as the compositor.
fedilink
2
external-link

Dynamic double/triple buffering for Mutter is ready to be merged

fedilink
@joojmachine@lemmy.mltoLinux@lemmy.ml•GNOME is about to remove the top panel's rounded corners for a performance improvement
link
fedilink
5•
edit-2
6M

I do wonder how much the aesthetic will change.

I can really talk about the aesthetic changes due to using the shell-theme-upstream “theme”, which now gives the option to have or not the rounded corners. It looks weird at first, specially after years of being used to having one, but we’ll get used to it. It’s not a make-or-break thing for the desktop.

To be honest it just looks a bit more like macOS now.

It always filled the corners whenever a window was maximized, but the rounded corners of the top bar were drawn over everything the desktop shows, like a GIMP layer that sits on top of every other one. Now that it is gone it just shows a the regular corners of the window, like this: 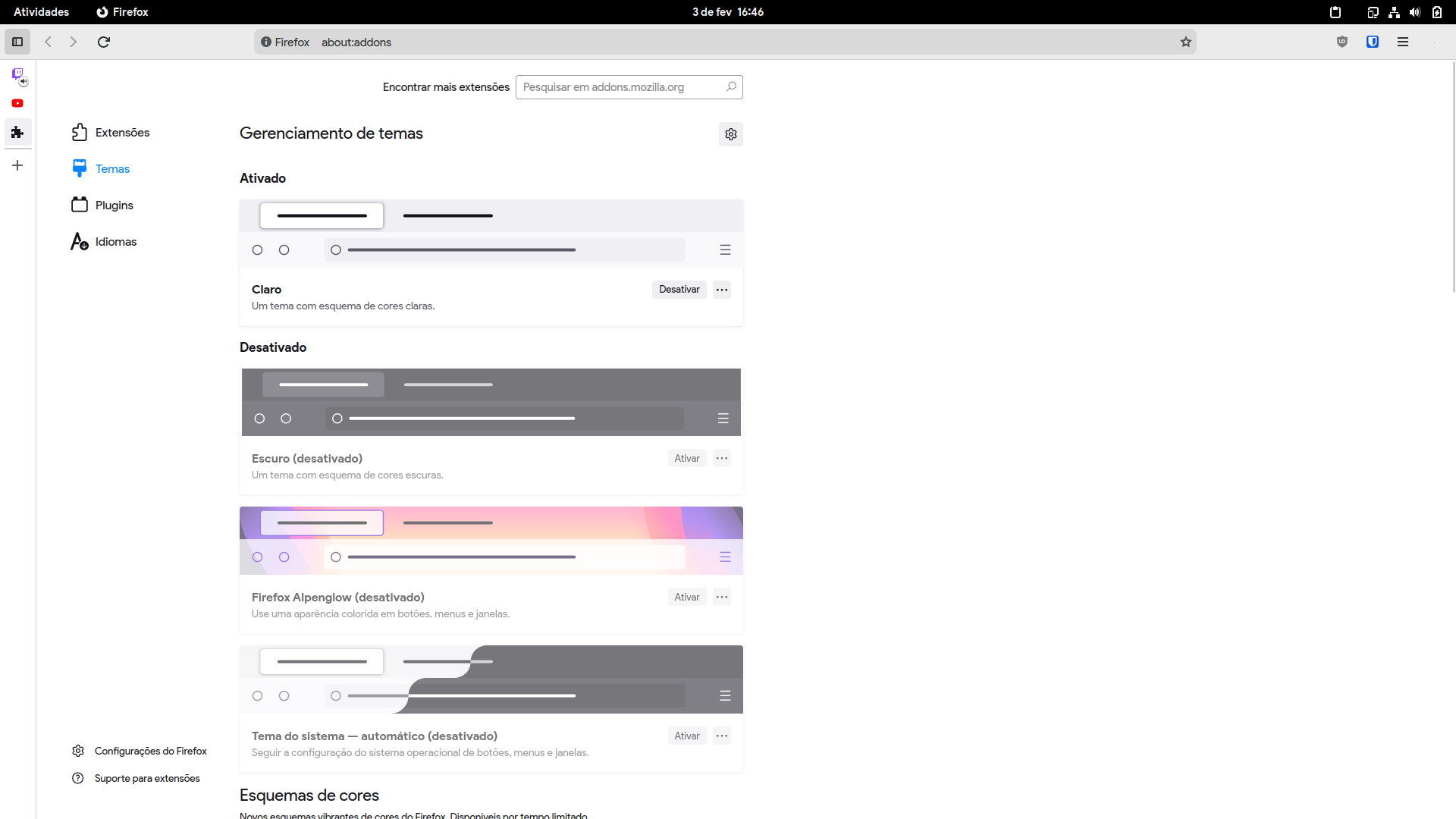 external-link
u/CleoMenemezis explained a little better on [the Reddit thread about it](https://www.reddit.com/r/gnome/comments/sjomqu/removing_panel_corners_means_performance/), but a tl;dr is: The corners are currently drawn on CPU and it is slow, and the way it's implemented is hacky, which could cause artifacts and made impossible to be used with themes.
fedilink
18
external-link

Yeah, I tried to use it for quite a while, but simply couldn’t without quite a bit of zoom, and a couple of extensions to make it look usable for me.

Getting the most out of your Intel integrated GPU on Linux

> Most distros package thermald but it may not be enabled nor work quite properly out-of-the-box. This is because, historically, it has relied on the closed-source dptfxtract utility that’s provided by Intel as a binary. It requires dptfxtract to fetch the OEM provided configuration data from the ACPI tables. Since most distros don’t usually ship closed-source software in their main repositories and since thermald doesn’t do much without that data, a lot of distros don’t bother to ship or enable it by default. You’ll have to turn it on manually. The particular thing in this post that I had no idea about. Had thermald installed for almost a year without a config file and completely clueless.
fedilink
5
external-link

Getting the most out of your Intel integrated GPU on Linux

For me it’s quite the opposite, I like the design itself of the redesign quite good (probably because I started using Reddit with it already as the default), but it runs like hot garbage.

Getting rid of the need for the usecase Linux distribution | Christian F.K. Schaller

Getting rid of the need for the usecase Linux distribution | Christian F.K. Schaller